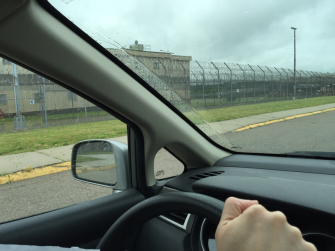 Me2/Boston recently performed at Bridgewater State Hospital in Massachusetts. This facility is named a “hospital” but is run by the Department of Corrections. Bridgewater houses 300+ inmates who have been deemed a danger to themselves or others due to mental illness. Some have been charged with a crime and are awaiting trial, while others have been sentenced and are receiving treatment. According to Wikipedia, Bridgewater is “a state facility housing the criminally insane and those whose sanity is being evaluated for the criminal justice system.”

Playing in a correctional facility is always a complicated process. It involves a lot of communication with the orchestra members in the weeks leading up to the concert about what they can’t bring into the facility (for example: reed knives, cell phones or medication) and what they can’t wear (for example: ties, piercings and jewelry). Entering Bridgewater was even more daunting due to safety regulations beyond what we’ve experienced in Vermont facilities; for instance, every musician had to undergo a background check before being allowed to perform in the facility.

On the day of the performance the orchestra set-up on a stage a few feet above Bridgewater’s gymnasium floor. A work crew of inmates put folding chairs in place for the audience. Just before the concert was scheduled to begin, 50–60 men shuffled slowly into the room and took their seats.

Before entering the facility, I had asked our host if I could hold a Q&A session with the inmates. He seemed a bit surprised by the question. He responded by saying that many of the men would be “pretty heavily sedated” so they may not have much to say. I pressed him a bit, saying that I’d really like to give it a try, and he agreed that it would be fine to attempt to engage the men in discussion.

After watching the men slowly enter the room for the performance, I began to doubt that this was going to be a highly interactive experience. I stood at the front of the stage, introduced the orchestra and explained our mission of erasing stigma. Ronald took the podium and led us in Mozart’s Impresario Overture. Despite the noise of a large fan in the ceiling overhead, the gymnasium acoustics were surprisingly decent. The orchestra received a warm round of applause at the end of the Mozart, after which we performed the first movement of Schubert’s Unfinished Symphony.

There were several memorable moments during the Q&A:

After 15 minutes of lively questions and answers, we ended our performance with the first movement of Beethoven’s Symphony No. 8. The standing ovation and enthusiastic applause we received from this audience was especially meaningful. We then loaded our instruments onto a truck to be driven around to the front of the facility (we were not allowed to carry them through the middle of the facility to reach the front door). As we walked in a line across the gymnasium floor to retrieve our IDs and return to our daily lives, the man who had earlier pronounced himself as one of the “best singers in the world” stood by the door serenading us all with his rendition of a gospel tune. Several other men waved and smiled from across the room.

Some time has passed since our afternoon spent at Bridgewater. Still, I find myself frequently thinking about one of the first men to raise his hand to ask a question during the Q&A session. His only question was, “When will you be coming back?”

Thoughts from a few of the Me2/Boston musicians: 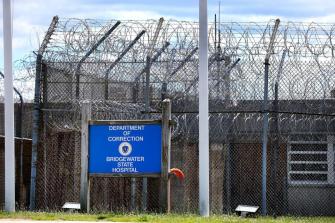 From Ariel, violinist: In the beginning I felt a great disconnect between the audience and myself. We may have intentionally gotten ourselves locked inside the facility for the day but they could not leave when the music was done. It wasn’t until the Q&A session that I felt linked to them. They asked many of the same standard questions that we usually get, ranging from “Why isn’t he using the stick other conductors use” to a surprising request for music by Shostakovich at our next Bridgewater concert. I hope that some of my personal biases have been broken down by this concert.

From Lisa, violinist: With all of the restrictions and rules and the high-security process to enter the compound, I think all of us went into the concert with a vague sense of anxiety and trepidation. That was diffused as soon as the music began. What the audience brought with them was a feeling of gratitude and openness, and an appreciation for the music that one does not always experience. This gratitude and kinship was even more evident after Caroline so skillfully invited them to participate with their responses. One could hear — and feel — their attentive silence during the Beethoven.

From Bob & Prill, clarinetist & violist: Speaking for two new Me2-ers, the concert at Bridgewater State yesterday inspired an extraordinary mix of feelings:  joy in the performance; humility at the privilege of bringing a few moments of beauty into the lives of the 50 + inmates who attended; awe at the opportunity to carry the music of three who suffered their own major struggles with mental illness – Beethoven, Schubert and Mozart – across centuries to such a place; sadness at the cold, dead-end feel of the institution and the poverty of our culture’s (and, for the most part, every human culture’s) handling of crime and punishment; resonance in the exchanges in conversation with the audience – each one speaking to and of the human connections between us (how wonderful to hear an inmate ask for Shostakovich next time; how lovely to hear the “best singer in the world” perform for us).

From Dana, flutist:  I want to confess that I learned something significant about myself in the process of playing with me2 at Bridgewater penitentiary.  We as an orchestra carry pre-conceptions about mental illness to our audiences, with a mission, in part at least, to speak to stigma by demonstrating that we are, in fact, human, integrated, safe, caring, intelligent beings who join in meaningful community to share our love of music. We walk with many illnesses/addictions, or none, but nevertheless we can discover togetherness, beauty, joy and even loving feelings.

But I, who personally carry the stigma that we aim to dispel, found myself having presumptions about the imprisoned men for whom we performed.  Would they be an interested audience? How would their demeanor be? How much control would they require? Would they think that classical music is un-cool, boring, imposed on them?

I felt myself developing a “relationship” with these men as the concert progressed and it gave me pleasure to play for them.  They were a lovely audience; they applauded appropriately, even with a standing ovation at times; they were engaged and appreciative of our visit; and they asked many sincere questions at all levels of sophistication, including, to the my surprise, questions about Ronald’s choice not to use a baton and about Shostakovich and Mozart.

I feel shame for even imagining that, in this prison with a reputation for toughness, we would not be engaging with men of high intelligence and intellect, who think deep and creative thoughts and, by chance, might be classical music geeks.  I wish we could have gotten to know them better.

It is inspiring to envision what a Me2/Orchestra could provide for those whose suffering has led them to the dark world of prison.