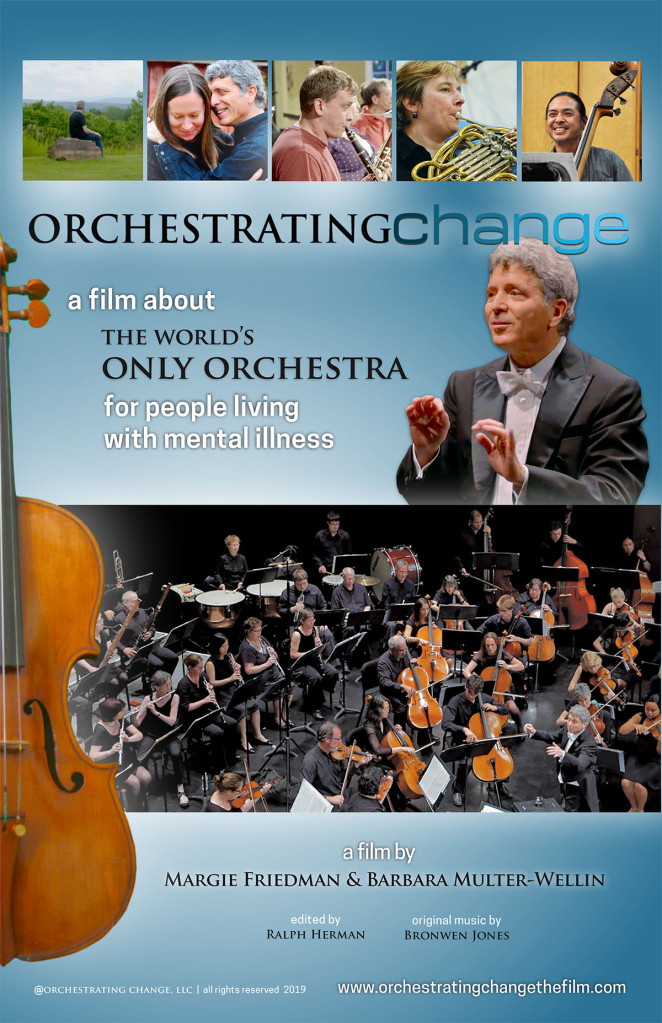 ORCHESTRATING CHANGE is the documentary film that tells the inspiring story of Me2/Orchestra, the only orchestra in the world created by and for people living with mental illness and those who support them. Co-founded by Ronald Braunstein, once a world-renowned conductor whose career was shattered when his own diagnosis of bipolar disorder was made public, the mission of the orchestra is to erase stigma one exhilarating concert at a time. As they rehearse, perform and prepare for a major concert, these extraordinary musicians have no idea how much the orchestra will change their lives in poignant and powerful ways.

How to Host a Group Screening of “Orchestrating Change”

It’s easy to schedule a virtual screening of “Orchestrating Change” the acclaimed documentary about Me2/Orchestra for your organization or group. There’s also the option of a Zoom panel discussion with Ronald, Caroline and a Me2/ musician featured in the film along with expert(s) from your own organization. Please contact the filmmakers at: orchestratingdoc@gmail.com

What Viewers are Saying

“A beautiful and captivating story of how music can change hearts and minds, create purpose and deliver hope for all those it touches. Such an inspiring film!”
Nina Richtman, Deputy Director, NAMI Iowa

“To the performers in the Me2/Orchestra, Mr. Braunstein is much more than a conductor. He’s a friend and a mentor, as well as a living example of what can happen when a person with mental illness is accepted unconditionally and treated with dignity and respect.”
Jane E. Brody, Personal Health Columnist, The New York Times

“We were privileged to be able to partner with the Orchestrating Change filmmakers on a week-long mental health series which included a screening of the film, a panel discussion, and a special concert with our local symphony orchestra.  The Me2/ musicians shared their stories in such a powerful way.  The film is a wonderful tool to raise awareness and fight stigma.  Highly recommended!”
Wendy Giebink, Executive Director, NAMI South Dakota

“I thought the event was excellent. I trust this film will make a difference in people’s lives and at the very least, open the conversation on mental health to a broader audience. Thank you!!”
Screening & Zoom Attendee

Me2/ (“me, too”) is the world’s only classical music organization created for individuals with mental illnesses and the people who support them. Me2/ is a nonprofit, 501c3 organization with affiliates in Boston, Burlington, and Manchester as well as a Flute Choir.