Submitted by cellist and intern Nick Sterner, in response to Me2/’s dress rehearsal and performance for First Night Burlington on New Year’s Eve.

Following a stint of spring-like weather, the air quickly resumed its frigid squall as New Year’s Eve approached. Me2/ met for one last rehearsal before the annual First Night celebration that brings musicians of all genres, performing troupes and festive merriment to Burlington for one last hurrah.

As Me2/ ran through the program of Strauss dances and other Viennese New Year’s fare a final time, the orchestra was restless. Coming in late myself, the environment seemed to show the true colors of the musicians’ personalities. We all seemed to resonate with each other, and most of all with the anticipation that we had a program to play the following evening. Mixed as the mood was, the rehearsal went brilliantly as Ronald reminded us that he would conduct spontaneously the following night. In any other group, Ronald’s vow of spontaneity would usually cause greater anxiety among the musicians, but the members of Me2 seemed excited and unphased by a potential ‘curve ball.’

The following evening, the musicians started to arrive for the 5 o’clock call. As the small green room inside of the Baptist Church became alive with friendly chatter, laughter and the tones of tuning instruments, there was no anxiety in sight. Whatever anticipatory mood that was prevalent the previous evening had disappeared and was replaced not with overt confidence, but rather a content joy. It was one of those unique moments that seem to arise when a group of people gather for an in-the-moment experience, together. 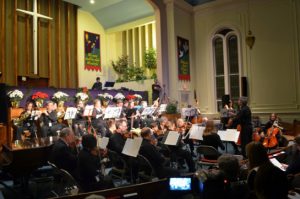 Calmly content, the group filtered into the sanctuary where we began with the rolls of a snare drum that harkened in the Radetzsky March and our conductor to the podium. As the concert proceeded, time seemed to stand still as Ronald led us through the program with the spontaneity he had promised us, leaving us to play without him during one instance as he walked through the aisles greeting the audience with an outstretched hand, only to come back to us to conclude the piece.

After we ran through the bulk of the program, Caroline Whiddon stood up from her seat amongst the horn section where she spoke about Me2/ and its message of inclusion in a stigma-free environment. After answering questions and comments from the audience, the string section played Jingle Bells with the audience ringing the strategically placed bells intended for this moment along to the beat of the music.

Ronald then emerged from the back of the orchestra without applause as he lifted his arms for the opening sparkles of the Blue Danube Waltz. As we traveled through the suave melodies of the lush dance, we took the time he wanted us to take as the group pushed and pulled the rubato together, creating the classic Viennese schwung.

In the final crescendo that marked the end of the dance, the audience rose immediately to their feet greeting us with their smiles and applause. As the concert came and went, the musicians were again in the green room, packing up their instruments and entangling themselves in their mass of warm coats. It seemed as if it was all in a day’s work for the members of Me2/, to play as they did with great feeling and playfulness, only to leave the church with a job well done.

Playing with Me2/ is a pleasure. This group of musicians comes together to play with music, not to make music. They come to each other as they are, with a vivaciousness that comes from a love of life, and left their performance humbly content. On New Year’s Eve, Me2/ played with music as if they had been the Vienna Philharmonic enclosed within the Musikverein. They dared to ask the music for a chance to dance, and that they did.