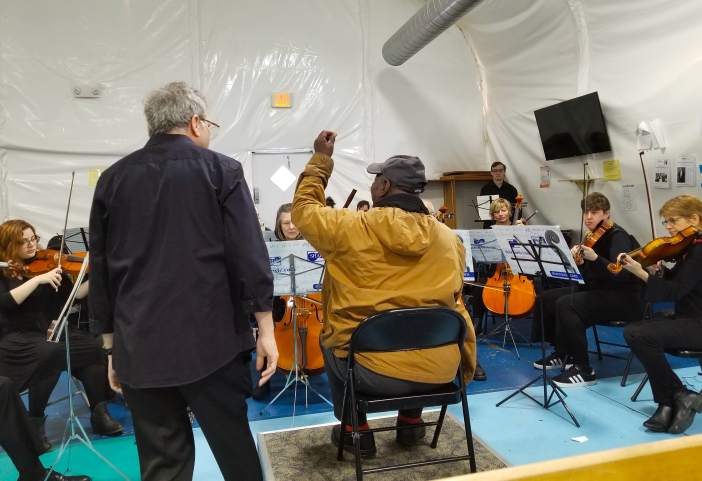 Last weekend the members of Me2/Boston held a very different kind of Conducting Workshop. When most musicians think of a conducting workshop they imagine young, highly-trained conductors stepping onto the podium and then receiving stern feedback from the Maestro in charge of the event. What transpired at Boston’s Engagement Center was quite the opposite in every way: we invited people in the audience, most of whom are homeless and some struggling with addiction, to give conducting a try in a fun and supportive environment.

We had no idea what to expect when we sent our musicians and Music Director, Ronald Braunstein, into the Engagement Center that day. Would anyone even want to conduct? What if nobody volunteered to try?

Five people at the Engagement Center tried conducting for the very first time that day. The faces of the Me2/ musicians lit up into bright smiles as each new conductor found their groove and began relaxing on the podium. For just a few minutes, these new conductors were in charge of the orchestra, receiving gentle suggestions from Maestro Braunstein.

The gentleman pictured above was encouraged by a female friend to try conducting. “C’mon… you can do it!” she said repeatedly. He said that he couldn’t even stand on the podium so there was no way he could conduct. One of the musicians quickly pulled a chair over and two people took him by the hands and assisted him onto the podium. He sat and listened as Ronald Braunstein told him how to start the piece. He began conducting and, several times as he waved his arms gently to the music, he closed his eyes and seemed to let the music rush over him.

Later his female friend told us that she was surprised he did so well on the podium. She shared that he is in the early stages of dementia.

Feedback from two of the Me2/Boston musicians:

“Initially it was a little unsettling because we didn’t know exactly what would happen, however everyone stepped up to the plate, most importantly, the clients of the Engagement Center. At first I was surprised at the choice of music.  [ Brahms Hungarian Dance No. 5 ].  I thought the stops and starts would be difficult to manage, however it was amazing how quickly our guest conductors figured out what was going on. Many of them seemed to have a natural talent for understanding the emotions behind the music and how to convey them with their hands and arms.

A conductor is by definition the one in control and for the clients of Engagement Center, who probably don’t get many opportunities to exercise control in their lives, this opportunity was particularly rich. I especially appreciated the fact that Ronald (Braunstein, conductor) was not satisfied with merely having them stand up and wave their arms around. He gave them real instruction and, without applying pressure, show that he expected that they could do well. What a great compliment! By expecting something, he conveyed the message that they are capable and worthy.”

“It was a beautiful new turn in the work we do as an orchestra to break through the boundaries between players and audience members and to lift all of our lives, players and listeners alike, above the chilling stigmas that divide us, one from another. Labels and conditions meant nothing as we, the players, responded to each of those who volunteered to try their hand at conducting a Brahms Hungarian Dance. When they moved with the alternating drama of the tempos and temperament of the piece, we moved with them, and we responded as much to the pleasure and surprise in their faces as to the notes on the page.  Even when a conductor’s movements were slight and hesitant, the orchestra fully responded to the spirit of those gestures, and we could see the conductor’s eyes light up with the power and simple human connection of the moment.

I saw some of our musicians for whom this was their first Me2/ gig with looks of pure joy on their faces, matching the looks we saw among the audience members and the applause and laughter with which they supported their mates at the podium. This was another testament to the healing power of music, especially when it is offered freely and with love in an environment like the Engagement Center.”